Many of us are living through our first REAL stock market meltdown. For myself & most of my 30-40 year old clients, we either  weren't out of college yet or we weren't making enough money (and didn't have enough money certainly!) for the pain to really reach us on a physical and emotional level. So this all feels new...which makes it feel even scarier and more unnerving. I get it...and you're not wrong...it is both of those things! But, please, take the time to ask your parents what they did in 2008...and knowing what came after, what they would have changed in their investment behavior if they could? And read my post below...because, trust me, it seemed like the world was coming to an end back then...and then it didn't. This too shall pass. - GD

Excerpt from How To Avoid HENRY Syndrome: Financial Strategies To Own Your Future:

Let’s take the last great market correction back in 2009 to bring home our point because it probably holds real meaning in your financial life.We all know how devastating 2007-2009 was for so many people whether you were an investor or not. Maybe your parents and grandparents suffered as they entered their retirement years as a result of the recession, and maybe it was the first time you felt, firsthand, what it was like losing your hard-earned money in the stock market. You wouldn’t be alone.

Here’s the reality though: if you had stayed the course, knowing that you didn’t need the money anytime soon and that you could (and should!) wait out the market correction, you would be looking back a decade later in fantastic shape.

Here’s what Mr. Nick Murray had to say back in November 2017,

(Nick Murray, November 2017.) But, as we already know, that’s not what most people did! If you had gotten out of the market with the hopes of riding out the rest of the down market in cash before feeling more comfortable to reinvest your money, well, you effectively solidified that lost! Take a look*: 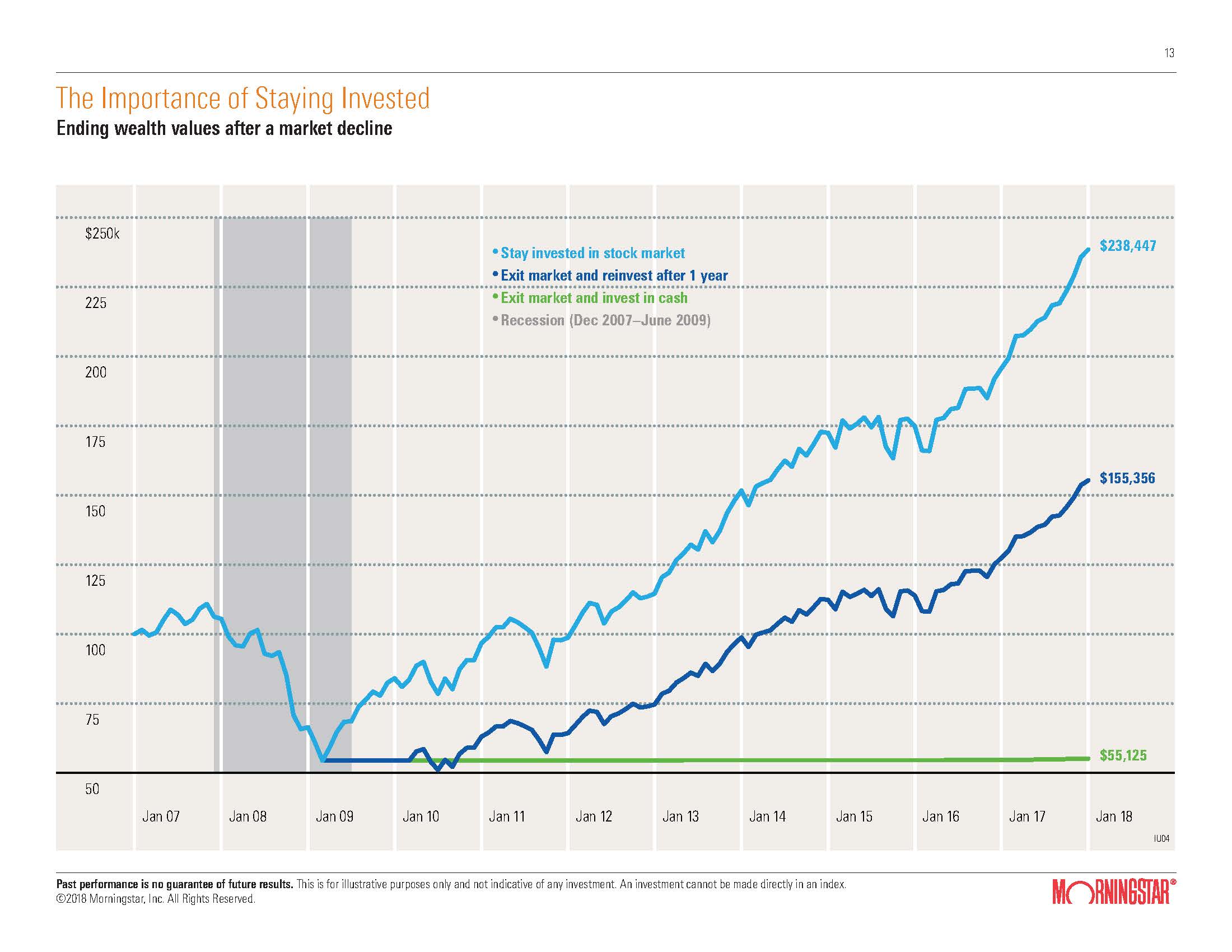 Think You Can Time the Market?

Let’s take this a step further (just in case I haven’t bludgeoned you enough with this idea). Some people come back to me (mostly my stubborn friends) and ask if all that emotional and behavioral stuff can be ignored if they know how to time the market, if they know when to get out right before the market downturn and then when to get back in before the stock market rallies.

Resisting the urge to roll my eyes so far back into my head that I can actually see behind me, I immediately offer them a job on our team. Since nobody in history has been able to predict market timing with any measure of consistency, if they can, we want them on our team!

Sarcastic or not, what I’m saying is true! If there was someone out there who knew, truly knew, what was going to happen and when, wouldn’t we all just invest all of our money with that person and go watch Netflix? Whenever this subject comes up, I punctuate my Netflix argument with the following chart**. 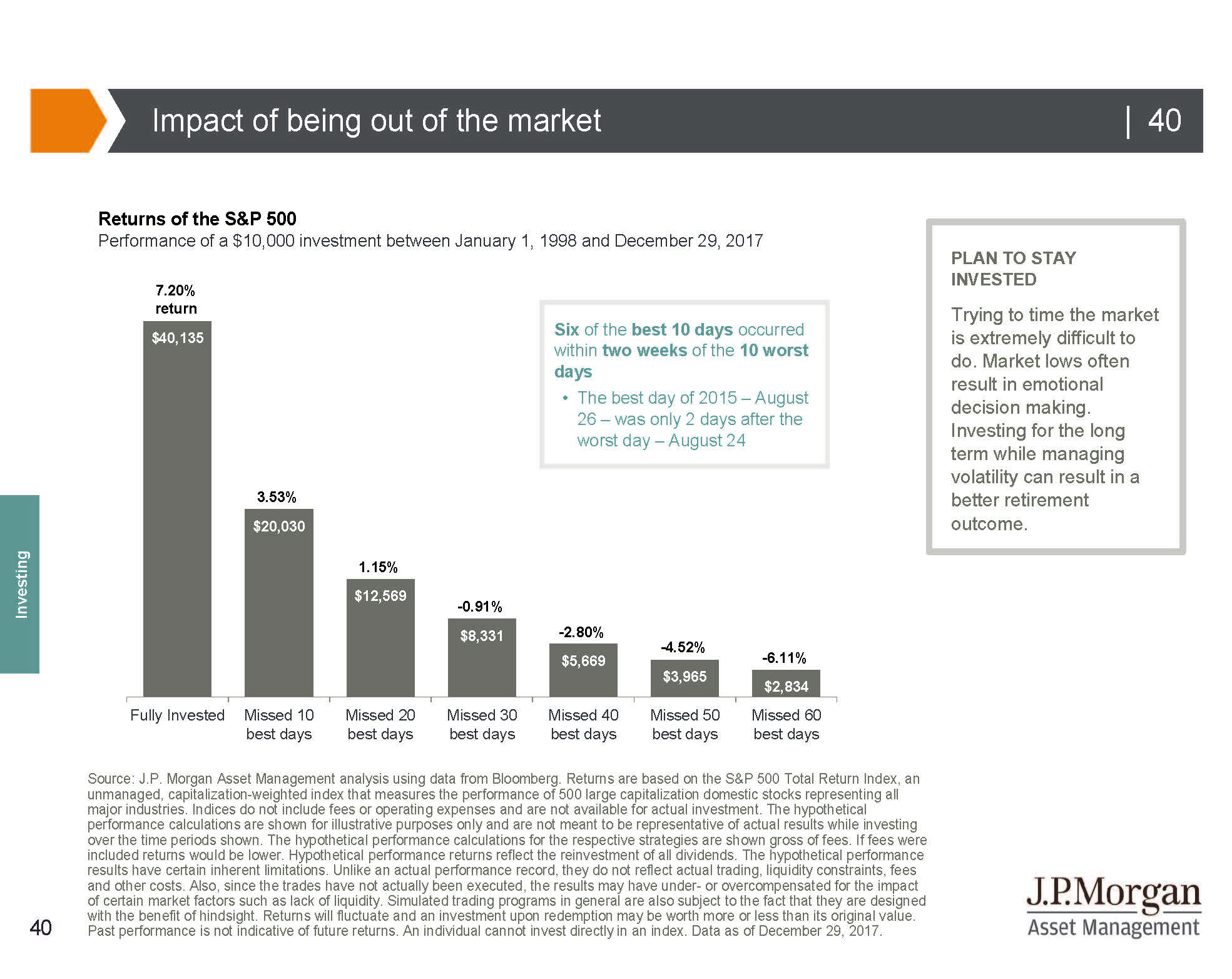 So if you think you can time the market, I say you had better have a real quick trigger and be able to spot the changes right away! Because as the chart shows, missing out on even the best twenty out of a whopping five thousand days available during which you could have been invested in the market means losing out on basically the entire market’s upside. Instead of making 7 percent annually, you’re down to an almost flat 1 percent, and as I said, that’s if you miss only twenty out of five thousand days!

Want to learn more? This is an excerpt from my book, How To Avoid HENRY Syndrome: Financial Strategies To Own Your Future.

Read How To Avoid HENRY Syndrome